From the mountains of South America, Khanauru brings to life the rich heritage of Andean Cultures. Colorful native costumes and unique Andean instruments are handmade from armadillo shells, llama skins, and various hollow reeds, which makes their presentation both authentic and entertaining and keeps delighting audiences time and time again. 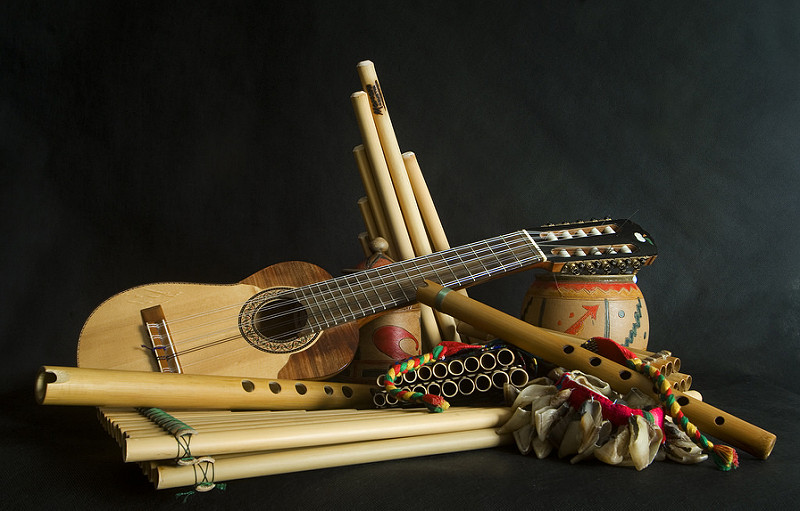 The music we offer is a small sampling of the music found in Andean countries. It is testimony to the endurance of Andean culture and to the many changes it has undergone for thousands of years. Moreover, it is an emblem of the development and evolutionary process that Andean music continues to experience.

ANDEAN MUSIC: Mistakenly called "Inca Music", present-day Andean folk music is the product of centuries of cultural and ethnic intermixing. The wind and percussion instruments indigenous to the Andean world existed in Pre-Colonial America hundreds of years prior to the advent of the Incas (1200-1500 A.D.) Archaeological excavations have proven that certain musical instruments in the Andean highlands were being played well before the birth of Christ. The Incas were, however, responsible for the highest development of Pre-Colonial Andean music. Unprecedented in its domination of an expanse of territory stretching over the boundaries of present-day Bolivia, Peru, Ecuador, northeastern Chile, and northwestern Argentina, the Inca dynasty created an empire that both imposed itself and incorporated various cultures.

The arrival of the first Spaniards to the Andean highlands at the beginning of the sixteenth century marked the beginning of the end for the Incas and many facets of their illustrious culture. Musically, it was the start of many transformations and the introduction of new instruments never before seen in the Americas. Here we have the appearance of the first stringed instruments: the guitar, mandolin, flute, harp, and violin being the most notable. Although confronted with a repressive colonial system in which native cultural, religious, and artistic manifestations were often obliterated, the Andean highlander continued to search for new ways of expression. European instruments underwent transmutations by way of new musical styles or new forms of tuning. Perhaps the best example of native genius was the creation of the Charango, a small ten-stringed instrument descended from the lute and traditionally made in parts of Bolivia with the shell of an armadillo. Also incorporated was the European system of musical notation, though many villages and regions remain faithful to native notation. The highland music of Ecuador, Bolivia, Peru, northeastern Chile, and northwestern Argentina forms the backbone of Andean folk music. There is no mainstream as each region and village is unique in terms of instruments, dance, tuning, and rhythm. The richness and variety are seemingly without end.